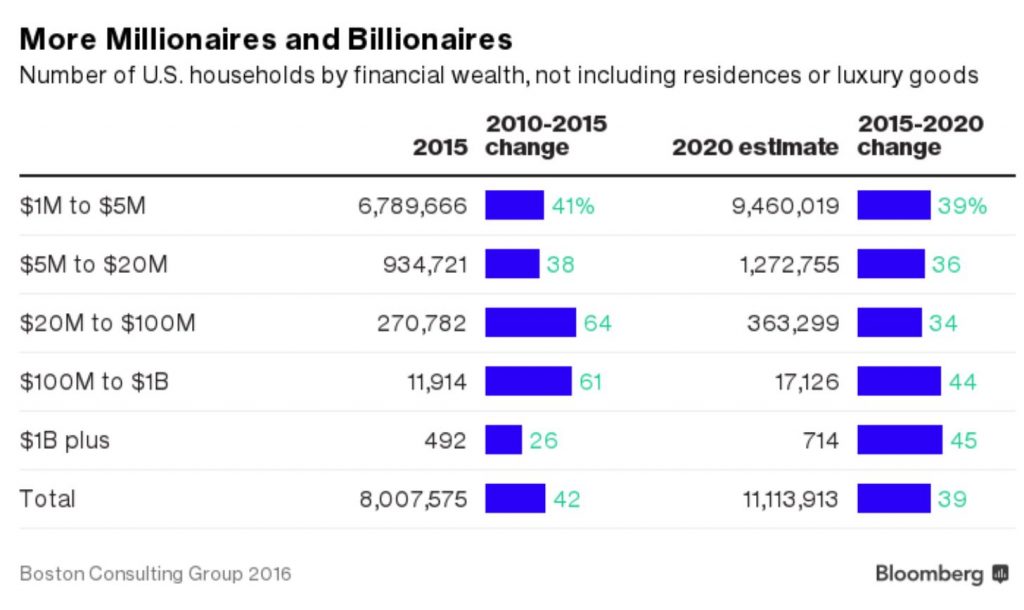 Here’s how we got here, and why it will probably continue – H/T daytrip!

The U.S. is home to a working class suffering from stagnant incomes and declining job prospects—widespread struggles that helped elect Republican Donald Trump. The relative wealth of Americans in all age groups keeps falling, compared with previous decades.

At the same time, the country is also home to an unprecedented amount of wealth, a divergence that has made income inequality a household phrase. America has $55.6 trillion in private financial assets and more millionaires than any other nation in the world by far. Today, more than 8 million households have financial assets of $1 million or more, not including homes or luxury goods, according to Boston Consulting Group. From 2010 to 2015, the number of millionaires jumped by 2.4 million. Another 3.1 million will be created by 2020, BCG estimates, at the pace of 1,700 new American millionaires every day.

But before your faith in upward mobility is restored, realize this: The very oldest Americans hold a disproportionate chunk of all those trillions, and they’re handing it off to their already well-off kids in what is the largest generational transfer of wealth in history.

Inheritance is an increasingly significant driver of wealth in America. Wide swaths of the country live from month to month with virtually no savings safety net. About three-quarters of the country are “strugglers,” unable to save anything from year to year, the Federal Reserve Bank of St. Louis concluded in a study last year. The other quarter of the country, however, are “thrivers,” the St. Louis Fed said—people who successfully save money and accumulate wealth over the years. These include the top 1 percent, who have steadily taken more and more of the nation’s economic output.

Being a millionaire isn’t what it used to be. A net worth of $1 million has the same buying power today that $341,000 did in 1980 and that $45,000 did 100 years ago, according to Bureau of Labor Statistics data. If you’re making six figures and saving regularly, you should eventually end up with a million dollars or more in your investment accounts. (You’d better, since you’ll need to save that much to have any hope of maintaining your lifestyle in retirement.