Interest rates have been moving higher for the last six days, and have priced in the 1/4% increase that the Fed is expected to do next month.  If the Fed does finally bump the Fed Funds rate, there should be some relief that’s it’s over, but don’t expect that lenders will give much back.

Mortgage rates continued pressing into the highest levels since July–themselves the highest levels of the year.  In just over a week, the most frequently quoted conventional 30yr fixed rate has moved from 3.75 to a range of 4.0-4.125%.  Most lenders are quoting the same contract rates as Friday, with the weakness instead seen in the form of higher upfront costs.

What’s with all the drama?  In a word: the Fed.  There had been some remaining disagreement about when the Fed was most likely to begin raising rates after nearly 7 years of the record low 0-.25% target.  Last Friday’s jobs report helped get everyone on the same page.  Unfortunately, the consensus is that the hike is all the more likely.  While mortgage rates are not directly linked to the Fed Funds Rate, most interest rates tend to rise when expectations for a Fed rate hike increase.

When rates rise as much as they have and for as many consecutive days as they have, it becomes increasingly likely that they’ll take a break and bounce back somewhat.  If you wait to lock, you will feel like a genius if that happens, but you could be looking at significantly higher costs if it doesn’t.  In this case, the risk of loss is greater than the potential reward for timing the bounce correctly.  Lenders aren’t likely to give back meaningful amounts of the ground we just lost unless the bounce is sustained and substantial.

“Borrowers and loan officers hoping for a fast rebound from Friday’s sell off were disappointed today, as we lost further ground and rates rose slightly.  Since October 27th, treasury yields have soared from 2.03% to 2.35%.  MBS lost roughly 150 bps during the same period, and our “sub 4%” rates are in the rear view mirror at the moment.  At some point, we’ll level off, and perhaps even undo some of the carnage, but until we do, I’ll be advising locking early rather than risking further losses.”

It wouldn’t take much for homebuyer demand to soften a bit.  Higher rates, fewer foreign buyers, the lack of good buys, and the holiday malaise could send the market into a slumber for the next 2-3 months. 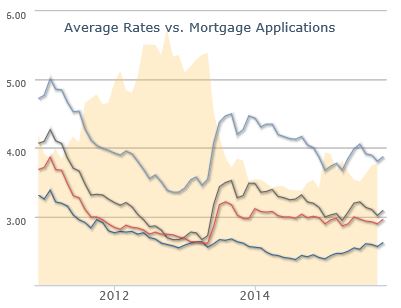