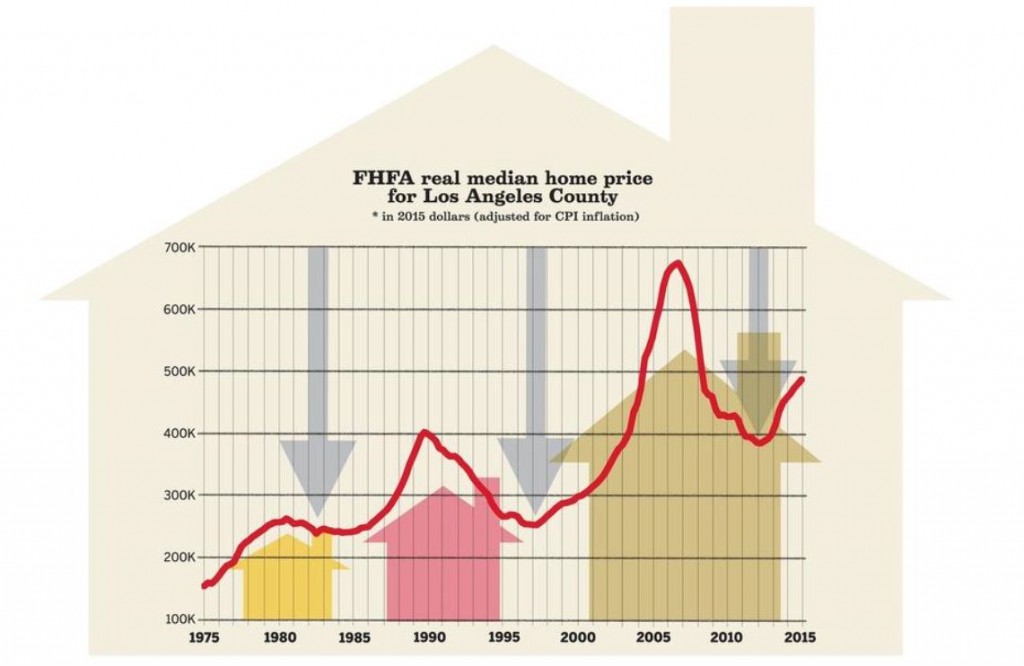 This is what you get when a college professor looks at today’s real estate market – faulty assumptions.  1) The graph he included shows the two years (2012-2013) of rapid appreciation; and 2) the building-permit numbers are skewed by the lack of land available, plus 3) rapidly rising rents help to reduce the home-price-to-rent ratio.

If history is any guide, the L.A. housing price cycle seems to last about 12 years on average, of which seven years is spent in the bull market with at least 65% real price appreciation, and five years is spent in the bear market. We are three years into the housing recovery that started in 2012, with 27% appreciation so far. On average, there will be four more years or 38% more price growth before we reach the turning point.

Of course, it’s possible the bear market could come earlier or later than four years, but that is quite unlikely to happen in the very near future.

How can I be so sure? Often, during a bubble-making period, we see an accelerating rate of home price appreciation, as in 1988-89 and 2004-06. In the last two years, we haven’t seen that kind of rapid appreciation in Los Angeles.

Yet another measure of rational housing value is a simple price-to-rent ratio. The ratio is calculated by taking the median home price over the annual median rent in L.A. If the ratio is high — meaning that home prices are beyond their fundamental value based on expected rental revenues — that points to a bubble. Again, let’s look at history.

That doesn’t worry me, though. A high ratio doesn’t spell danger for Los Angeles because, similar to New York (ratio: Manhattan 25, Brooklyn 23) and San Francisco (ratio: 21), it’s now a “superstar” city. L.A.’s size, amenities, weather and geography make its houses an investment target for the global elite. Wealthy individuals from all over the world don’t care that it might make more financial sense to rent, because they’re not simply buying Los Angeles houses to live in them, they’re also trying to diversify their financial portfolios.

Even though Los Angeles is one of the least affordable cities in the U.S., all factors indicate that it is not in a housing bubble. Of course the bull market will end eventually, but that doesn’t mean we’re heading for a devastating crash, like in 1990 or 2007. Whether you should put up a million bucks for that bungalow is another story.