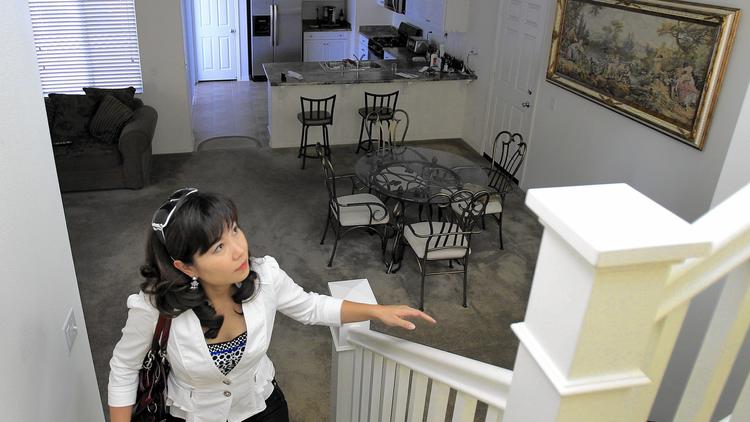 “At first, they were a little leery,” she recalled. “They’d say, ‘OK. I’ll buy one property as an investment.’ Six months later they were amazed at how much they were getting back. They call and say, ‘I want to buy more.'”

Today, the transpacific trade in Southern California real estate is big business. Chinese citizens bought $22 billion worth of homes in the United States in the 12 months that ended in March, according to estimates by the National Assn. of Realtors. And with its direct flights to China and large Asian communities, the Southland is their favorite destination.

They’re buying homes for themselves to emigrate, for their children to attend college, or for rental income. Neighborhoods from Irvine to Arcadia are being transformed.

Chen now employs eight people — who, combined, speak eight languages — to buy and manage properties. She has offices in Irvine, Chino and Taiwan. When she hears grumbling about Chinese money pricing out American home buyers, she notes that it helped revive the housing market, and that all those transactions keep people working at banks and title companies and contractors.

“This has created a lot of jobs,” she said.

But even she’s starting to wonder how much longer this influx of cash from across the Pacific will last. The Chinese government keeps making noise about clamping down on currency leaving the country. The U.S. government is talking about taxes on foreign investors, which could make buying here a little less attractive. Buyers are starting to get a bit spooked. And there’s only so many of these deals she can do.

All that has Chen wondering what trend might come next.

“I think I’m not going to be putting as much energy into this,” she said. “I think the next few years are going to be a good time for first-time buyers.”

Shipping-container homes costing $206,000 per bed is cheap? This L.A. project shows that homeless housing can be done quickly and cheaply https://www.latimes.com/homeless-housing/story/2021-01-18/los-angeles-homeless-housing-project-vignes-street