Thanks to the folks who sent in the Property Radar press release yesterday regarding the July sales in California.  They mentioned that median prices fell in 13 of the state’s largest 26 counties:

But they didn’t say which counties!

Both sales and the median price in SD County look like they are topping out:

Are you thinking of selling and are worried you missed the prime market? It could get more sluggish next year – sell when everyone else isn’t!

LOS ANGELES (Aug. 20) – Given the depletion of distressed homes on the market, investors are changing their strategy and are moving away from purchasing homes in more popular, urban areas in favor of more rural areas of the state where better deals can be found, according to a CALIFORNIA ASSOCIATION OF REALTORS® (C.A.R.) investor survey.

The median sales price of an investment property in 2014 was $320,000, up 9.6 percent from $292,000 in 2013, reflecting increasing home prices and fewer available distressed properties over the past year.

• Reflecting the recovering housing market, the majority of investment properties purchased (70 percent) were equity sales, while 18 percent were short sales, and 12 percent were foreclosures. • More than two-thirds (67 percent) of investors paid cash • One-third of investors were foreign investors, with China, Mexico, Taiwan, and India being the top countries of origin. • While most investors made minor or no repairs to the properties, the percentage of those who did major remodeling nearly doubled from 9 percent in 2013 to 17 percent this year. • Investors spent more on remodeling costs in 2014, putting a median of $15,000 into the investment property, up 50 percent from $10,000 in 2013. • Investors own an average of 8.3 properties in 2014, up from 6.5 properties last year. • More than half of investors (55 percent) intend to keep the property less than six years.

C.A.R.’s “2014 California Investor Survey” was conducted in May 2014 in an effort to learn more about the role of investors in the California housing market.  The survey was emailed to a random sample of REALTORS® throughout California who had worked with investors within the 12 months prior to May 2014.

Leading the way…® in California real estate for more than 100 years, the CALIFORNIA ASSOCIATION OF REALTORS® (www.car.org) is one of the largest state trade organizations in the United States with 165,000 members dedicated to the advancement of professionalism in real estate. C.A.R. is headquartered in Los Angeles.

This is what happens when our industry leaders are asleep at the wheel – others keep jumping in to get their piece of the action.  These guys seem like just another agent-rating website, but they are a real estate brokerage too – and will co-list the property with the agent you select:

Launched in May 2013, Agent Ace uses patented technology to analyze a user’s location, home type and price range based on based home sales data to recommend the “single best agent for your needs — based on facts,” according to its website.

After a consumer asks to work with a recommended agent, Agent Ace offers the consumer’s business to the agent – usually by proposing to co-list or co-represent with the agent, but also sometimes through a referral agreement — in exchange for a slice of the agent’s commission if the match results in a sale.

The service doesn’t reveal the identity of an agent to a consumer until an agent has given express written permission for it to do so, Fawaz told Inman News.

The startup uses its status as a broker to acquire listings data and agent performance statistics from multiple listing services. It is licensed as a real estate brokerage in 43 states, has done several hundred transactions in the last few months, and has joined 140 MLSs, with that number “increasing every week,” Fawaz said. 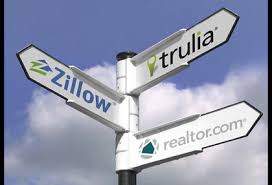 Whether they merge or not, Zillow and Trulia are ahead of us. Let’s spend our dues on making realtor.com competitive!

The National Association of Realtors — one of the most powerful lobbying groups in Washington — wants regulators to block the $3.5 billion merger of Zillow and Trulia, The Post has learned.

The two companies, which rely on advertising from real estate agents for the bulk of their revenues, are the leading Web sites for home listings.

The trade group’s similar offering, realtor.com, is a distant third.

The three are the only national real-estate sites of scale that show what properties sell for and list properties.

“People are grumbling about the merger,” a well-placed DC source said. “They are arguing there are only three” so there should not be further consolidation.

Broadview Networks compiled a list of real estate blogs around the country.  The common theme among them?  Get good help!

Check them out here:

by Jim the Realtor | Aug 18, 2014 | About Kayla, About the author, Actives/Pendings, Jim's Take on the Market, North County Coastal | 0 comments

It was quite a day today, but hey, they’re all great days!  I think we are as busy as we’ve been all year, and for one reason.

Logic and common sense are returning to the market.

They are being fueled by Zillow and Trulia, because they are providing a baseline – some place to start the investigation.  Every person I meet has already looked at Zillow first!

Zillow is pouring it on too – they are spending $75 million this year on advertising!  I hear them every day on sports talk radio, and with all their headlines, they have become the household name for real estate.

What’s next for consumers?

I hope the combined effect of higher prices, thin inventory, and low rates causes more people – both buyers and sellers – to use the tools, and be more methodical about their decisions.  Work with agents who bring extra value – especially those who employ effective sales strategies.

When the frenzy was cooking, buyers just wanted to grab a house, and they fired at will.

Many of the prices paid didn’t have much relation to the easily-found comparable sales. But the gamble paid off – they are in, and have probably gained some equity.

But now that prices are up 20%, people are being more cautious and deliberate – which is a great sign for the future of the local market.

The logic setting in can be seen in our actitve-to-pending ratio:

Make no mistake – the lower end is still on fire.  The higher-end folks tend to price their homes to sit.  There are 323 houses for sale listed over $3,000,000, and the average market time is 153 days (eating up the entire selling season and still not sold).

But forget the statistics.

Today was monumental for many due to the first day of school – and we are no different.  Kayla’s sister Natalie started her senior year of high school today, captain of the dance team and in charge of her destiny:

When you see the phrase, “Seller to Select Services’, it is code for the listing agent to dictate the escrow and title companies for your transaction.  The affiliated companies are big business, and the listing agent’s brokerage will typically get a piece of the pie – and it’s legal if they disclose it.

But some take it too far – HT to daytrip!

A new federal court suit alleging kickback violations by one of the country’s top-producing real estate sales teams raises an unsettling question for home buyers: Could your agent or broker be pocketing under the table large chunks of what you pay for title insurance?

Some legal analysts say the litigation should be a wake-up call for realty brokers and their customers nationwide. It focuses fresh attention on the often murky financial relationships that exist between title insurance agencies and realty firms — relationships that have been drawing increasing scrutiny from the federal Consumer Financial Protection Bureau.

The suit, which was filed in U.S. District Court in Baltimore this month, alleges that Creig Northrop Team P.C. — a real estate group ranked among the highest-grossing nationwide in recent years — received payments totaling $1.3 million from 2001 to 2014 from a title insurance company, which the complaint characterizes as illegal “kickbacks” that were never disclosed to buyers. The plaintiffs also allege that the defendants used “sham” employment and marketing agreements to disguise the true nature of the payments.

END_OF_DOCUMENT_TOKEN_TO_BE_REPLACED When comparing active listings to pendings, we have called a 2:1 ratio ‘normal’.  It goes the same for total listings-to-solds; only half the listings sell in a normal market (which can be an abrupt lesson for sellers to realize that there’s a 50% chance of failure).

This isn’t a perfect measure below because it’s comparing the total listings taken in the same period as the sales closed (between Jan. 1 and July 31) but the sales include some listings from the previous period.  But to be able to gauge this year’s performance, it’s close enough – we’re comparing the ratios.

When the percentage gets around 60%, it’s frenzy time.

Jumbo mortgage rates are in record territory, which should help keep the market alive the rest of the year: