All 20 cities studied by S&P Dow Jones reported positive price gains for the second consecutive month in a row. Only Charlotte and Dallas saw a deceleration in annual gains during June, while 18 of 20 metro areas posted better price returns over last year.

“We seem to be witnessing exactly what we needed for a sustained recovery; monthly increases coupled with improving annual rates of change. The market may have finally turned around.”

“The combined positive news coming from both monthly and annual rates of change in home prices bode well for the housing market,” said David Blitzer, chairman of the S&P’s index committee.

It must be getting pretty comfortable in those ivory towers for these guys to finally mention that there could be a recovery. Case, Shiller, and Blitzer never talk about sales counts, which are better indicators of things to come.

Once the summer push is over in about 30 days, we should start seeing the sales counts drop off dramatically around San Diego – there’s not enough well-priced inventory left to sell.

Could buyers who just listen to these soundbites rush out in a panic and go pay more than they should? Maybe, but I doubt it – not after waiting this long.

I don’t agree with his assertion that ‘improving home prices should boost home sales further in the coming months.”  Improving prices make sellers want to wait until they go higher – especially those potential sellers who are underwater. 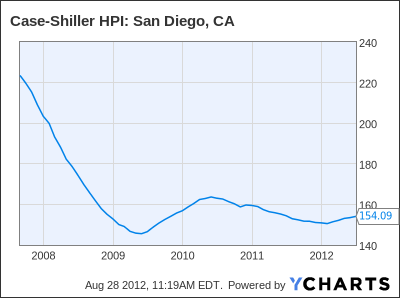