Continuing our run of bungalows, this 1950’s beach box has a load of potential, because you might be willing to live here ‘as-is’.  It was marked pending yesterday:

The Southern California region is facing a another wave of foreclosures with many San Diego borrowers underwater on option ARM and Alt-A loans that are scheduled to reset soon, according to San Diego real estate investment firm Blue Sky Capital.

Blue Sky Capital said it has been tracking properties in San Diego County and many of those with adjustable rates will not be able to afford larger monthly payments when their loans reset. The REIT says more than 36% of San Diego mortgages are currently underwater.

“While these option ARM and alt-A loans exist throughout the county, areas like Carmel Valley are filled with them. During our tracking of distressed properties in the county we found many homes in areas like Carmel Valley were purchased with zero, or a small amount down, so there is very little equity in theses properties,” said Chris Williams, CEO of Blue Sky Capital. “Carmel Valley, just north of the city of San Diego, has a median income of $90,000 and while higher end families have been able to withstand the initial housing meltdown, things are about to change. We will see more housing distress in Carmel Valley, and as a result, more foreclosures and short sales.”

Many homes in the area remain in negative equity, cutting down on the inventory of for-sale homes, Blue Sky Capital said. The result of this trend is higher prices since limited inventory pushes prices higher.

“You could say the positive of this negative equity is that it helps drive home prices up, as underwater homeowners delay as long as possible putting their home on the market which creates a supply constriction. But it’s only temporary and not a real sign,” said Williams. “These situations are unsustainable and certainly short lived. Strategic defaults, foreclosures and property value declines have to happen for the market to reset and clear itself of the toxicity from the greatest mortgage mess of this century.”

You can see the hot spots around our area from comparing the actives to pendings. We have seen in the past that a 2:1 actives-to-pendings ratio is a good barometer to indicate a ‘healthy’ marketplace.

With short sales being approved faster and buyers hanging on, I’ve included the contingent listings with the pendings. Here is how the detached-listing counts break down:

To see every area except the ultra-highenders be well under the 2:1 ratio is remarkable.

San Diego’s Case-Shiller Index numbers were up in April, the fourth month in a row: 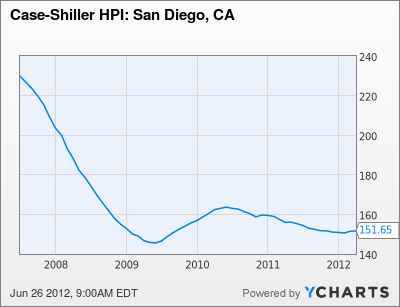 He  cites four competing home price measures that all show home prices increasing  year-over-year, which conflicts with the decline in the Case-Shiller  number.

For  example, the CoreLogic home price series, arguably the broadest  measure of home prices in the US, has increased four months in a row at a +11.8%  annualized rate. This is the fastest rate since the four months ending November  2005 (+11.7%). Over the past year, the CoreLogic series is up +1.1%.  Importantly, the FHFA home price figures have shown similar  price appreciation; the series is up three months in a row at a +11.3%  annualized pace. Over the last 12 months, FHFA prices have increased  +3.0%.

Additionally,  the improvement in the year-over-year growth rates is corroborated by both the median existing and new home price data, where  the gains are +7.9% and +5.6%, respectively. Hence, we have four different home  price metrics that are showing much more substantial home prices improvement  than C-S, leading us to downplay the significance of the latter.

LaVorgna  also attributes this discrepancy to lagging data. “Over time, we expect C-S to  catch up to these other home price series.”

All  of this has us wondering if we should really be paying attention to the  Case-Shiller at all.

Looking at old photos, the kitchen was already in place – these guys just painted it:

Among the changes reported by CRL is a narrowed scope for both the loans and servicers covered by the bill.  The only loans to which the bill will now apply are first mortgages on owner occupied one-to-four family houses and only servicers who process more than 175 foreclosures per year will be subject to many of its requirements.

Earlier versions of the bill required the lender or servicer to record and provide evidence of all assignments as part of the chain of title to foreclose.  The current version requires that only evidence of the last assignment be available to the borrower.  The current bill also includes an express and comprehensive right to cure until the notice of trustee sale is filed.  A servicer can avoid liability by curing a violation before the foreclosure sale.

Originally the bill provided post-sale minimum statutory damages of the greater of actual damages or $10,000; the new version allows only actual damages with triple damages or a minimum of $50,000 available only in cases of intentional reckless violations or willful misconduct.

Unlike the National Mortgage Settlement the California bill allows for multiple contact persons as long as they have the access and authority of a single point of contact.  Prohibitions against dual tracking and false documents remain as in the original law, however the enforcement provisions sunset after five years.

CRL says that this Homeowner Bill of Rights remains critical for large number of borrowers, their communities, and the California housing market.  It ensures that borrowers in owner-occupied homes applying for loan modifications get full and fair consideration for those modifications before the foreclosure process begins.  This will allow the foreclosure process to move more quickly for those who do not qualify for home retention alternatives while preventing unnecessary foreclosures on borrowers who do.

First, loan modifications work well to keep borrowers in their homes.  More than 80 percent of California homeowners who received modifications in 2010 stayed current and avoided re-default despite the continued recession.  Only 2 percent of those modified loans ended in foreclosure.

Second, large numbers of borrowers remain at risk with nearly 700,000 California mortgages in some state of delinquency or foreclosures.  This is one out of nine borrowers.

“California policymakers will soon have the chance to extend key servicing reforms from the National Mortgage Settlement to all California borrowers, said Paul Leonard, CRL’s California Director.  “Our legislators have an historic opportunity to overcome intense opposition from the big banks and ensure that all Californians get a fair shot at loan modifications.”

There hasn’t been the widespread appreciation – yet – that normally signifies a “sellers market”.

But as we’ve been documenting here, multiple offers are being submitted on every reasonably-priced listing.  In many cases, sellers – and their listing agents – aren’t happy enough just to get a good price, they want to put the squeeze on the winning buyer too.

It’s understandable for listing agents to use other contract terms to help improve the sellers’ deal, and weed out the less-committed buyers.

But when they act like a it’s free trip through the candy store, some buyers will reject the terms outright, and others may accept but be hesitant and/or bitter of the treatment, neither of which aren’t in the sellers’ best interest.

4. Exclude attached items that should be included (appliances, lighting, etc.).

This last item should be very concerning to buyers.  Your loan documents include a clause that has you agree to occupy the home within 30 days after closing.  But even if the sellers agree to vacate a day or two after closing, that could always change, and you could be left with an eviction process.

What do you do if you are the buyer, and find yourself having to accept a delayed occupancy?

2. Ask where the sellers are moving.  If it is a vague answer, you could end up with sellers/tenants who don’t want to move when scheduled, and in California that can be a nightmare.

3. Insist on a deposit. Many listing agents think this is absurd, because they are owners, not tenants.  But that doesn’t mean things won’t get dinged up on the way out, or garbage left behind (which happens a lot).

4. Include a specific amount in the agreement for “holdover rent”.  I usually calculate a daily rental rate based on the higher of the market rent or buyer PITI payment, and then double it.  If the sellers stay past their agreed date to turn over occupancy, then they should pay extra for inconveniencing the buyers who’d have to change their move-in plans.  Some rental agreements don’t include a clause for holdover rent – write them in.

5. Monitor their progress as escrow is proceeding, and prior to releasing all contingencies on Day 17, verify that they are moving as planned.

6. Do a walk-through a few days prior to close, and see if they are packing.

Sellers and listing agents who respect the buyers will have a better chance at getting top dollar, and having a smooth transition.  If there was one piece of advice, it would be for sellers to give buyers immediate occupancy at closing – take advantage of their enthusiasm about moving into their new home!

Shouldn’t every district being doing this? From the nctimes.com:

Property owners in the Old Creek Ranch area of San Marcos will save more than $2 million in special taxes under a bond refinancing that the city completed last week.

Located in the southwest part of the city, at Melrose Drive and Rancho Santa Fe Road, the area is part of a Mello-Roos district that levies special taxes to help pay for roads, traffic signals, and water and sewer facilities.

The refinancing will shave $2.1 million from about $19.1 million in outstanding bonds for those services by cutting interest rates from 5.88 percent to 4.60 percent.

That translates to a 10 percent reduction in taxes, which range on average from $1,070 per year for apartments to $2,420 annually for single-family homes, and $9,388 per acre for nonresidential properties. Under the new bond terms, property owners will save between $107 and $939 per year.

This is the second time this year that the city has taken advantage of historically-low interest rates to refinance bonds in its Mello-Roos districts.

The city took a similar action in January to cut property taxes in the Santa Fe Hills neighborhood of San Marcos by $52 to $141 per year.

Roque Chiriboga, manager of financial analysis and debt administration for the city, said earlier this year that city finance staffers continually monitor the bond market for savings opportunities, and have refinanced special tax bonds about six times in the past 20 years.

The council approved the change for Old Creek Ranch in May, and city staffers completed the refinancing earlier this month.

“At some point, there’s a tipping point where there’s a cost benefit to do the refinance,” city spokeswoman Jenny Peterson said. “When everything aligns and it’s the right move to make, then that’s when we take it to the Council.”

Ideal bachelor pad, could use some TLC: