U.S. single-family home prices rose for the first time in 10 months, in an encouraging sign the battered sector is starting to stabilize, a closely watched survey said on Tuesday.

The S&P/Case Shiller composite index of 20 metropolitan areas gained 0.2 percent in February on a seasonally adjusted basis, matching economists’ forecasts.  It was the first time prices have gained since April 2011. That gain was itself an anomaly in a string of declines stretching back to May 2010.

Still, David Blitzer, chairman of the index committee at Standard & Poor’s, cautioned that while there were some pieces of good news in the report, some areas still continued to decline.

The actual change is just noise, but casual observers might think that “things are getting better”. Every little bit helps? 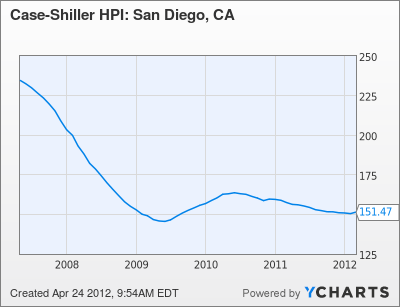